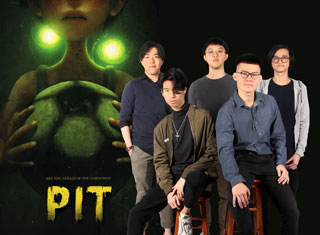 “Pit” is a CGI animated short film produced by the students of The One Academy. The 29-strong team comprised of 17 students from the School of Digital Animation and 12 students from the School of Illustration. “Pit” follows the protagonist, referred to as The Boy, as he treads carefully to retrieve his ball which landed in a dark and ominous-looking pit. The sense of foreboding realises as he comes across The Creature. However, an unexpected twist at the end will show that not all is as it seems.

A collaborative effort between the two faculties for their final year project, the story was inspired by the childhood experience of the director, Sean Yew Zi Xuan, who recalled the unforgettable memory of having to retrieve a ball that had fallen into a ditch and gazing into the dark abyss feeling unsettled about something sinister looking back at him. He pitched his personal story and his vision was brought to life by the talented crew.

“Apart from the entertainment, the core message we tried to convey was that we should often take a moment to look around us and not take mother nature for granted. Even the filthiest places are the results of human negligence and it would be nice to make an eco difference for mother nature,” he continued. “Also, never judge a book by its cover. There is a twist at the ending showing that due to how the creature looks like, it was feared and misunderstood.”

“We really wanted to push the visuals for this film. We looked up to our seniors a lot and how great their films were. In terms of visuals, we really explored a lot of different methods, rendering techniques, shaders used and texturing methods. There were many trials and errors that were hard on all of us, but we believed that we pushed it as much as we could with the time that we had. So we hope that our efforts are enough to impress the viewers,” added co-director Daniel Goh Wei Shen.

For tips on making great animation, they said that, “we should often study real human movements in detail to capture the subtle nuance and see the differences between natural and mechanical to achieve a realistic animation.” They also shared on how they were thoroughly impressed by their senior’s animated short film “A Folded Wish” whereby the fine detail of fibres on a shirt was captured in a scene.

“The character design for The Boy was inspired by films such as ParaNorman, Frankenweenie and Coraline, animations that have dark themes. We did a lot of exploration sketches based on the references. We struggled a lot but I think we did OK in the end,” said Leonard Ricky Santoso, the art director.

“As for The Creature, we all agreed on the design that most resembled a reptilian or a slimy creature, so we came up with a fluid motion for it when we were drawing the frames. With camera shots and angles given by the directors, we used our creativity to change on how the scenes should look and made it more cinematic,” explained storyboard artist, Adam Wong Chee Yuen.

“There were challenges in the technical aspects and issues that I’ve never encountered before. It was a lot of going through trials and errors and making sure that everything works. Things were pretty much a breeze after that,” shared Denzel Eu Yong Jie, the technical director.

“Visual achievement was our priority, but most importantly story comes first. As Martin Scorsese once said, ‘the most personal is the most creative.’ So write a compelling story that is close to heart and impactful to impress your team and they will be convinced to help bring your vision to life,” Sean said in advice to aspiring filmmakers.

The team thanked their Digital Animation and Illustration lecturers for their help in pushing them towards the right direction and giving them valuable, constructive feedback. They also thanked the crew members as the success was the combination of everyone’s efforts. Their animated short film can be watched on YouTube at www.youtube.com/watch?v=Ih_uTcTcpS4&t=7s.

The One Academy is committed to providing the best art education programmes and continues to nurture its students passionately through its “Masters Train Masters” coaching philosophy, which has been practised for the past three decades, by providing diploma and degree courses namely Advertising & Graphic Design, Digital Animation, Digital Media Design, Film Visual Effects, Interior Architecture & Design, Illustration, Fine Arts and Paris Fashion Design & Pattern Making. For more information on The One Academy, visit www.toa.edu.my or call +603-7875 5510 or e-mail your enquiries to [email protected].